It’s my second time here in Beijing. I still remembered how I used to dislike this city, since… you know, I couldn’t seem to understand the language well. That time, ordering food seemed to be a big day-to-day problem to me. I even wrote about this language thing on How to Survive in China Without Knowing How to Speak Chinese. It shows how desperate I was, 4 years ago. Even worse, not only that I feel people are generally unfriendly, but I feel that they are also angry all the time. And it’s because I don’t understand the language.

So, several months back, before our departure to Beijing this year, Fred and I learned Chinese language for like, 2 – 3 months. I can say that it has helped us a lot during our trip. We could listen a bit of what the Chinese said, and ordered our food in Chinese. And hey, suddenly Beijing doesn’t feel that bad! It’s pretty nice, really.

We went there to celebrate Fred’s sister graduation. She studied and lived in Beijing for 3 years and it finally came to a time when she can show us around the city. Oh now I know why I like Beijing more now. Because I got a tour guide!

So anyway, of all the places that she took us during our trip, there are some that I like, some that I don’t really enjoy going to since I’ve been there before, and some that I adore. Here are some of those places which I think you don’t want to miss. You might think it’s just another list of landmarks and ancient sites you can easily google. Well, might be true. But then of course the trip will be boring without good food. So now I’m giving you both, based on my personal view and taste.

The whole city looks like a movie set to me. There are river along the city, old-looking houses and building, bridges, canoes, everything!

Gubei Water Town might be touristy. You even have to pay CNY 150 for the entrance ticket (yes, there are several professional-looking ticket booth, and security checks), but that’s totally worth it. I might say that, this water town is the highlight of my trip to Beijing this year. It’s that good. (I’ll write another story just for this water town. Promise!)

From Gubei Water Town, you can walk (just follow the road sign) to Simatai Great Wall entrance gate. If you want to go to the great wall, you have to pay an extra CNY 160 (including round-way cable car ride).

Then, there’s this cable car ride that you can take to get up on the wall. I think it’s the only way to get up there. We had so much fun riding the cable car because of this….

The view on the way up are just… breathtaking.

How to go to Gu bei Shui Zhen :

If you’re using a private car, then it will be no problem. Just use your trusty navigation app to get there. But, if you’re planning to use public transportation instead, here’s how :

2. Guan Bing, Jiao Zi, and You Tiao for breakfast

One of the most common breakfast meal in Beijing. It’s pretty simple. Crepe wrap, with egg, lettuce, pork, and some sweet spicy sauce. I found it tasty, but this particular one is just a little bit too oily.

If you crave for something warm and hearty for breakfast, opt for the famous Jiao Zi instead. It is sold early in the morning just until 10 am at almost every corner of the city. And it’s just CNY 6 per steamed pot (10 dumplings in total)!

Another favorite dish of mine is You Tiao. It’s one of those fried dough I usually bought for breakfast in Jambi, my hometown. Costs only CNY 1 per you tiao.

Kao Yu (Roast Fish) is not actually Beijing-style dishes. It’s from Sichuan, another city in China. Basically they bake the fish in the oven, and then they charcoal-grill it so it has this crispy flaky kind of skin. They then put the cooked fish on a tray along with all the condiments like mushrooms, tofu, anything you choose, before pouring the hot chili oil onto it. And not to forget, the dried chili pepper.

Oh, they also use this Sichuan peppercorn, which makes it tasted unique. I can’t describe it, but you don’t wanna bite one. It has this tingling, numbing sensation on your lips and tongue.

Despite the fact that they use a lot of chili in this one dish, it doesn’t taste that spicy – I’d say it as a mild spicy. It’s very fragrant though, so you will always crave for more.

Where to eat Kao Yu in Beijing :

Kao Ya and Kao Yu might sounds similar. While “Yu” itself means “fish”, “Ya” means “duck”, so yes, Kao Ya means roast duck. If you’ve heard about Peking Duck before, this is it.

One thing about Peking duck that makes it different with any other roasted duck, is that it has this thin crispy skin with just a little part of the meat. And the meat, oh my, it’s succulent, it’s fatty, it’s delicious.

To eat it, you take the thin pancake wrappers, you put some amount of fresh scallions, cucumber, and sliced roast duck on top of it, and you roll it. Some like to dip the roasted duck with hoisin sauce before wrapping it, but I like to dip the whole wrapped thing into the sauce. It’s just easier that way 😉

Where to eat Kao Ya in Beijing : 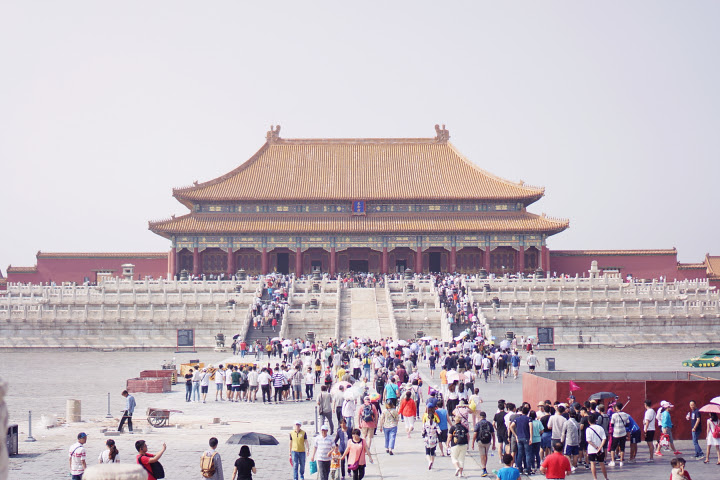 It’s a huge fascinating square, you’ll need an hour or two to walk from the south gate (wu men) to the north gate (north gate) alone. So, enjoy yourself. And don’t forget your sunblock. And your passport, or you won’t be able to buy the entrance ticket.

Walking along the Forbidden City is exhausting, I get it. What about some snack now?

If you’re up for some unhealthy snacks (read : fried squid, sweet milk tea, some other fried snack, sweet cake, and more), this place is for you.

Nan Luo Gu Xiang is an old part of Beijing city. It might looks just a narrow street, more like an alley, but it still has the ancient houses with ornaments and traditional architecture. People usually call it Hutong. It’s a nice place to stroll around before sunset! Not only food, there were also some interesting antique shops you might want to check out.

We love this place so much that we strolled around until it was too late for dinner.

I remembered when we bumped into this big furry friend. He was lying down with his head on his paws before I shocked him. Guess he likes this cafe so much.

If those snacks at Nan Luo Gu Xiang doesn’t bring the beast side out of you, maybe you might want to head to Wan Fu Jing instead.

Here in Wan Fu Jing, there’s this street food area, shorter than the one at Nan Luo Gu Xiang, where you’ll find extreme snacks like fried scorpion, some other bugs, and even seahorse (So sad! Seahorse is the cutest right?)

I did manage to try their fried scorpion, though. And to be honest, it doesn’t taste weird at all. It’s just like, deep fried tiny fish.

So that’s pretty much it!

If I have another chance to visit Beijing again any other time, I would definitely revisit Gu Bei Shui Zhen and probably book a night in the hotel inside. I personally think half a day is a very short time to explore the city. We were in hurry and there was so much that we missed.

Been to Beijing before? What am I missing?