It was an unusual Saturday morning for me. I woke up early at 6, took a quick shower, brewed my coffee, and off I went to Agritektur office at Jl. Mataram, Bandung. I’ve been waiting for that particular day for sooo long. Yes, it’s the ‘CAMP ON FARM’ day!

As you can guess from the name of the event, we were having a camp at Dago Dairy Farm that day. It’s a lovely local farm at the north side of Bandung, in Buniwangi Wetan area.

From the meeting point, we traveled by Land Rovers to the farm (what a car, eh!). There were approximately 20 to 30 of us joining this event. And yes of course, they provide 3 cars for us.

Each of us got this super cute, what is this, a semi apron? Later I used it as a sling bag as it’s more convenient that way.

Our cars stop at some point, then we have to walk just a little bit further to reach the farm. Look at the view from up there! 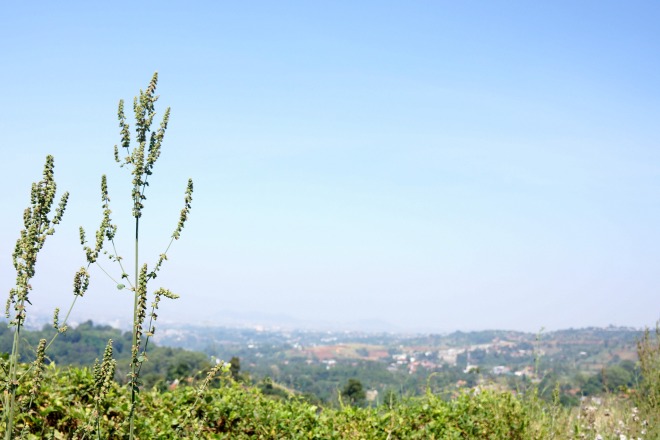 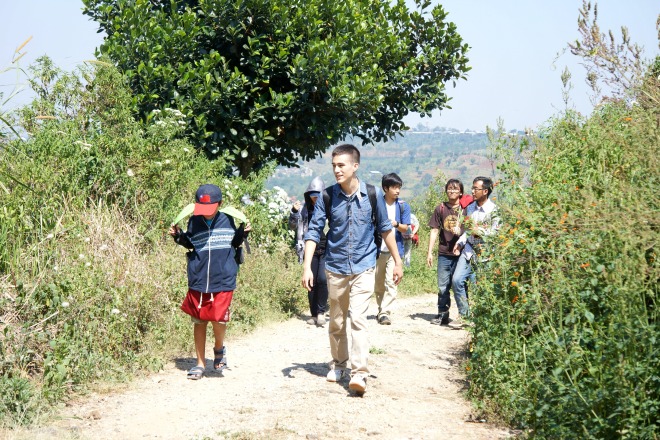 A lovely farm has been waiting for us. 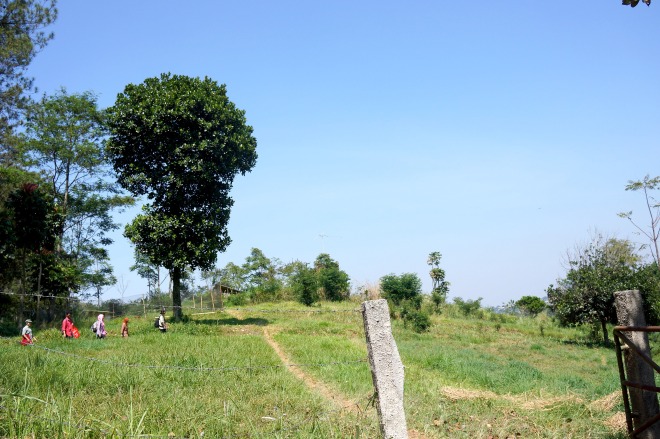 I can’t believe there’s such place like this private farm here. I mean, it’s just 30 minutes away from the city!

This farm sort of reminds me of my childhood memories. You know, our dad used to take us to the farm on weekend. We’d go playing with the cows (we had only three though), go fishing (boooooring!), have picnic, and yeah, most of the time we just wander around the farm picking some flowers. My mom would bring snacks for us. And yeah, that was the moment I’ve been waiting in the whole week.

Oh where were we?

When we reached there, the very humble owner of Dago Dairy, Mark, greeted us warmly. He then explained a bit about several things related to the farm, the cows, the chickens, the grass they plant for the cows, and even about the animals he usually found in the woods. Oh there’s just so many things I didn’t know before. And then later, he took us on a tour of his farm. 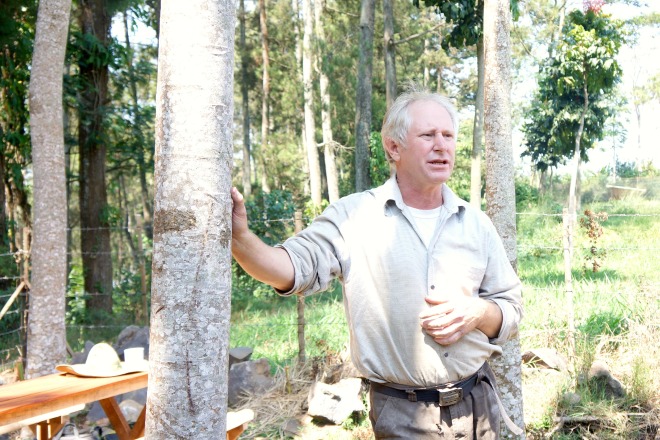 The cows Mark has here are the hybrid cross between the dairy cows from Indonesia and New Zealand. There are about 26 of them, and each of them has their own name. Charlie, the 15 months y.o cow was injected that morning since she got her first menstruation! Congrats, now you’re legal! 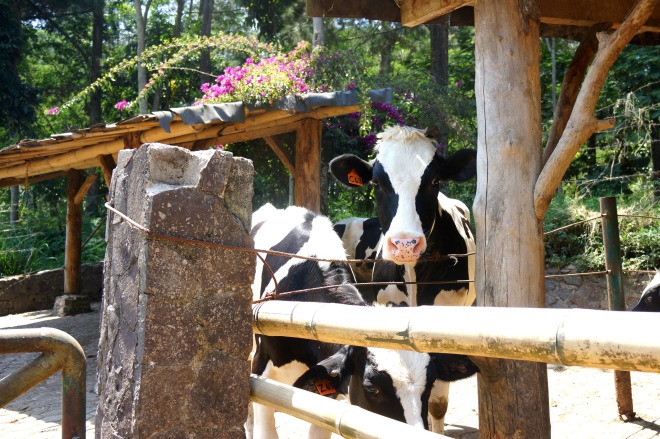 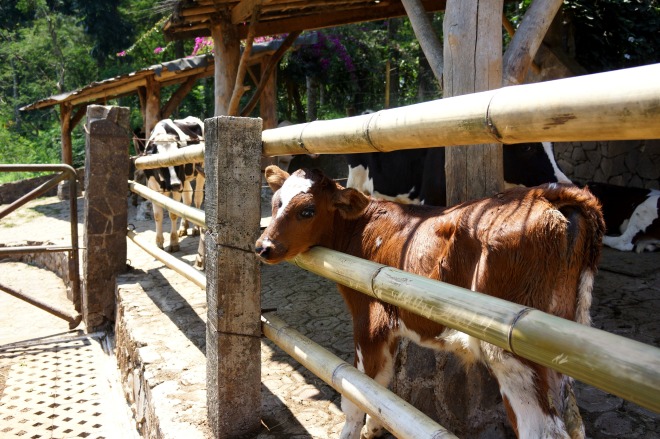 Do you know that a dairy cows can only begin to produce milk just after calving? Just like us, human! The difference is that the newborn calves are separated from their mothers, but then they are still fed milk from them. The milk that the cows produce right after giving birth contains colostrum, which has good nutrients for the calves’ antibody. And they only produce it like 4 to 7 days after calving. So it’s very important for the calves to get the colostrum or else they got sick easily. Some other farm might use colostrum replacers, like a dried milk powder or something. But here, the calves are feed with the real colostrum. You see, it’s a farm! Not a milk factory.

They milk the cows twice a day, 3.30 am and 3.30 pm. And right after milking, the milk is then pasteurized, cooled, packed, and ready to be delivered to the local supermarket, cafe, restaurant, and hotel. So it’s really fresh, right from the cows.

Oh did I mention that they use low temperature pasteurization? It might take quite sometime, but that way, the protein, the fat, and the good bacteria, the bacteria that our bodies need to stay healthy, is preserved. A lot of bigger dairies use UHT (Ultra High Temperature) pasteurization just because it is faster so that they can processed more milk in a day. But what it does is it kill all the bacteria, the good and the bad, and break the protein and healthy enzymes as well. So yeah, I don’t know what I’ve been drinking my whole life.

You might be asking about my part here in making the yogurt. Yeah, just watching and taking photo. Easy peasy.

After making the yogurt, we then headed to the chicken section.

You won’t believe me if I tell you that these chickens will get away from the henhouse, but then they will eventually come back just before sunset, because they know it is unsafe for them to be outside in the dark. And I saw it! They were like, lining up, walking back to the henhouse and waiting for Mark to lock them in this small wood henhouse. 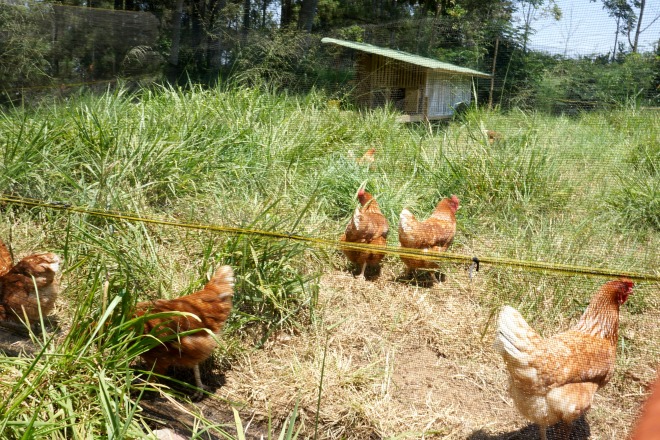 There are 25 of them, and they produce eggs regularly. The eggs here are different with the one we usually found at the supermarket. You know, the yolk has this more intense yellow color. That’s how you know it’s a good quality of egg. Too bad that they don’t have the permit to sell the egg at the supermarket, because you know, here in Indonesia, you’ve got to get a permit from Badan POM. And it might take quite sometime, and effort, and not to mention, money too. And when Badan POM asked them how many chicken they have, they said 25 and they laughed their ass of. So… Mark can only sell the egg to the local cafe and restaurant.

Then here comes the most interesting part of the camp. The DIY workshop! We made mayonnaise and butter. And you might already know that both recipe calls for a pair of strong hand (and patience, which I’m not really good at) for mixing and shaking.

To make mayonnaise, you need 6 egg yolk, 300 – 350 ml of vegetable oil, vinegar or lemon juice, and a big bowl with a whisk. Mix the yolk until it reach some point of consistency, then add vegetable oil little by little, mix it slowly and the egg will start to get a mayonnaise-like sort of texture. Then add the vinegar or lemon juice (or both), and any other seasonings like salt and pepper, and TAADAAA you’re done.

It’s quite easy since, the local chefs do most of the part of the work. Ha!

To make a butter, you need a small jar, milk, and cream. Pour the milk and cream (half and a half) into the jar. You can go for a whole milk, or a whole cream if you want. Then, *shake shake shake* and keep shaking just until it turns into butter – which never seemed to happen in my case. 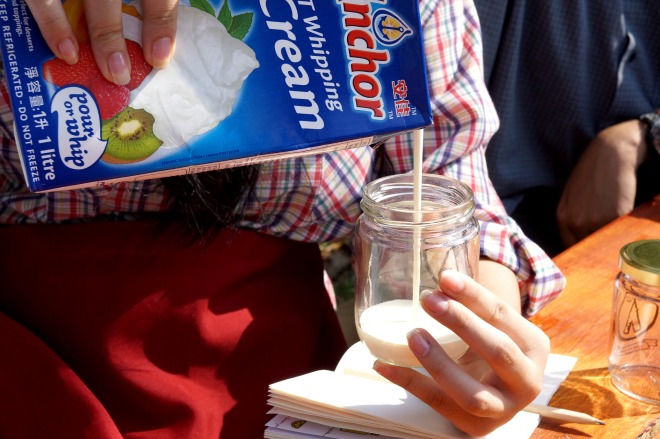 But guess what? It did turn into butter the moment I got home! I think it’s because it’s too hot outside the farm and the butter was kinda melted so we didn’t see it as a butter.

Turned out, making mayonnaise and butter is a lot easier than I thought! It just need patience, two strong hands, and a friend to help.

We also peeled the corns for the bonfire! 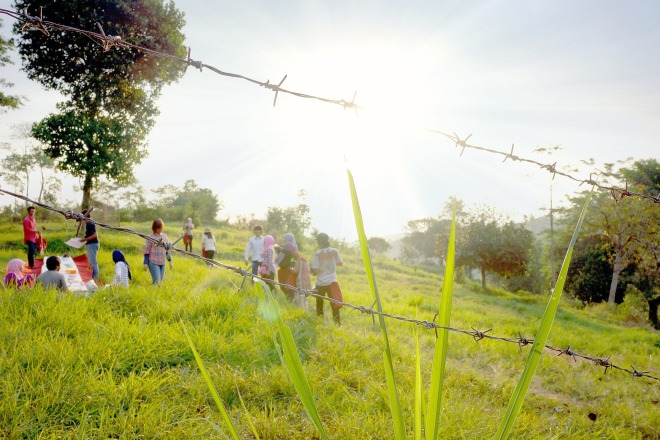 We had this long table set with candles, napkins, flowers, and of course our plates and spoons. It was so great to see so many happy faces around me!

Mark mentioned how he had been dreaming about having this kind of dinner at the farm. And yeah, it came true! It was no doubt, one of the most lovely afternoon I had spent in my life.

The talented local chefs cooked a very good food for us. We had roasted chicken with bbq sauce, baked potato with mozzarella and rosemary, and Caesar salad.

And the even better thing is, we’ve got to see the sunset! What a perfect dinner. Great food. Great place. No complain. I wish nothing but another occasion like this. 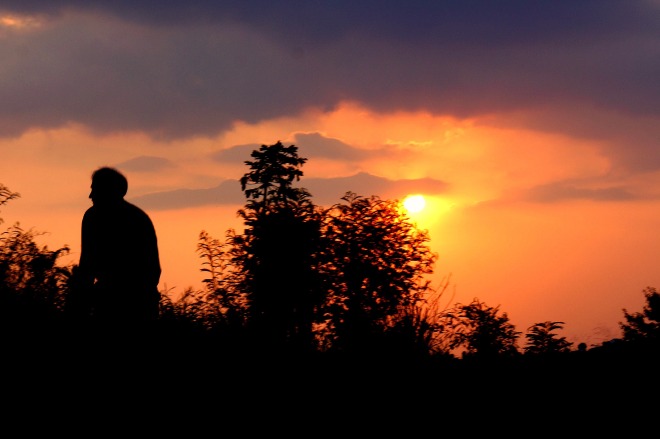 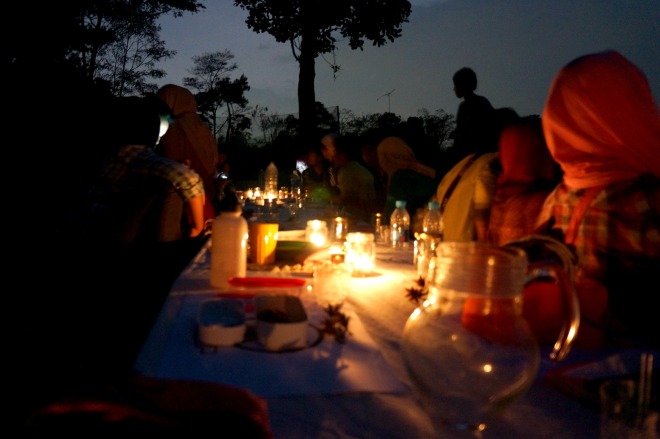 Bonfire, and a Goodbye

So it’s dark already. We all headed to another part of the farm and had a bonfire, and corn grilling session. This was unfortunately the last thing we did at the camp.

I had a lil chit chat with Mark during the bonfire. He told me about the places he’s been and how he finally made it to Bandung and owned a farm here with his wife, Yanti. I can see that he loves what he’s doing now, taking care of the cows, chicken, and the whole farm. He even stays there on weekend so that the employees can sort of take a two-days off.

I hope there are more people like him, people who dare to follow their passion and make a living from it.

It was suuuuuch a great day for me. I met some new great friends. And memories that last forever.

And I’d like to give a special thanks to Mark for having us all at farm and of course, to AGRITEKTUR who made this happen! Thank you, from the bottom of my heart.

FYI, AGRITEKTUR will be having another CAMP ON FARM next month! (And the next following months ahead). Go follow their Instagram or Facebook to stay tuned. They also hold this so called PARAPPA, which is a pop up market selling local foods and stuffs every Tuesday and Saturday morning. So don’t forget to drop by when you’re around!

You might also wanna check Dago Dairy’s facebook page as they post the pictures from their lovely farm daily. They are so proud to show everyone how they farm and care for the cows!

Once again, thank you so much for having me at your event, Agritektur. Hope to see you all anytime soon!