I rarely go to Sukajadi or Setiabudi area since it’s pretty far from where I live. I mean, not that kind of far that will takes more than an hour to drive, but, it’s far for me since I have no private car here (and even if I do, I can’t drive) and I have to take a public transportation instead. So when Fred came by last weekend, I took advantage of him. I mean, of his car. I ask him to take me to Setiabudi Supermarket so I could FINALLY get my sea salt, yay! Going to make some more pretzels later.

Sukajadi and Setiabudi areas are quite popular among Jakartans. There are malls and dozen of restaurants, which later I found to be the main thing that attracts people to keep going there.

Jubilare Wine and Dine is one of them. We found in Tripadvisor that Jubilare is the #1 Restaurant in Bandung. That is exactly what makes Fred don’t feel like he want to miss it this time. After spending our afternoon at Lembang, we went hungry like crazy and decided to check Jubilare out. Well, it was all Fred’s idea. He even planned it before he reached Bandung. 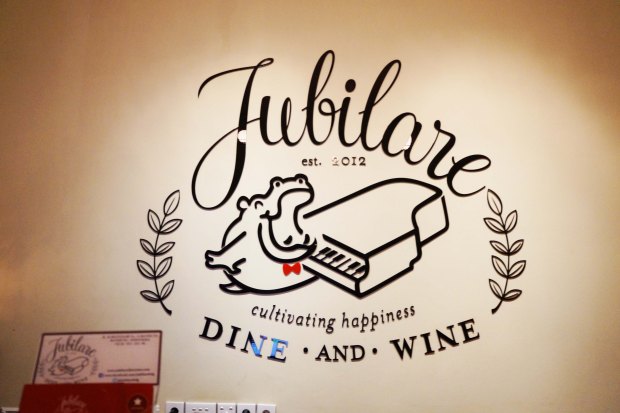 I was kind of surprised that Jubilare was established in 2012, and still they made it to the #1 Restaurant! I thought it was already there a long time ago since the building itself is an old Dutch building. Or I guess it’s a new building and they make it looks old instead. Not sure.

I was surprised at how homey it feels in the restaurant. Even if they serve a fine dining kind of meal, it doesn’t feel awkward at all! The service is beyond compare. I mean, the waitress is so hospitable. And he explains every bit of things we don’t understand, without THAT intimidating look. Nothing at all. He was just super friendly and helpful. 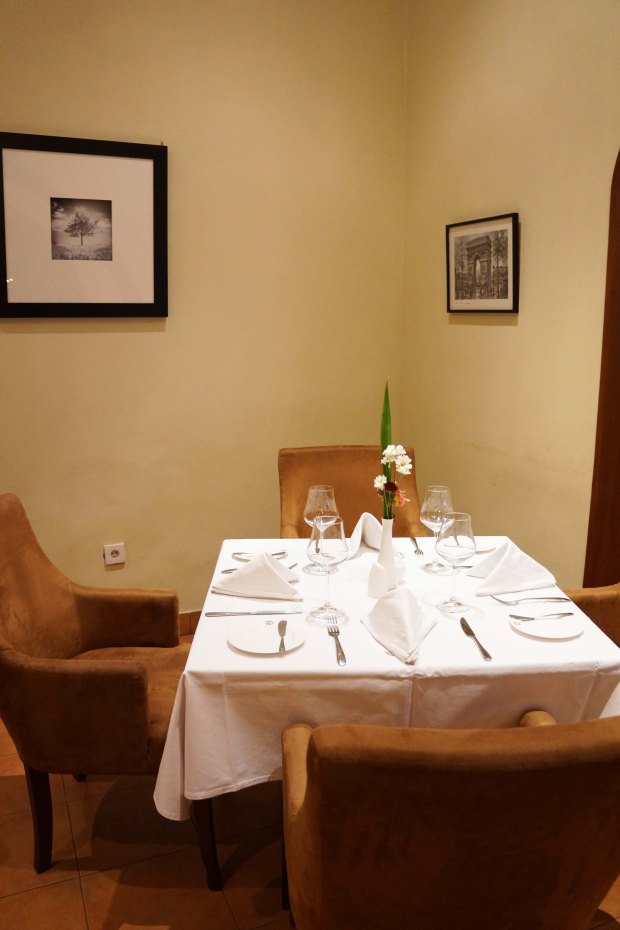 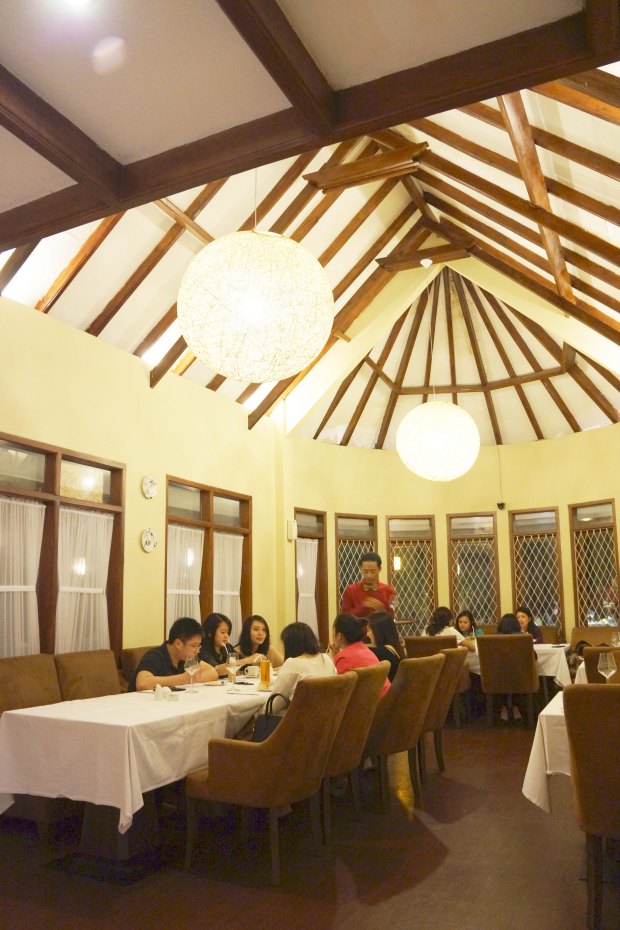 We managed to have a perfect seat near the singer. And the sound system is so good. They even put a speaker on the toilet.

Anyway, about the food.

We had bread and butter for appetizer, and it’s free! That’s what I like about this kind of restaurant. They give you free appetizer. Oh it reminds me of how delicious the appetizer in Ultimo, Bali is.

As for the main course,

Fred had something called Rack of Lamb (IDR 165k), one of the most popular dish in Jubilare. I had a bite. Okay… Two. And I was somehow mumbling, “why didn’t I ordered this at the first place?”. The meat was well done, and juicy, and tender. And the sauce is extremely flavorful. It’s served with mashed potato and some vegetables.

Hey, don’t you think the mashed potato looks a lot like Durian?

As for me, I had Stuffed Baby Chicken (IDR 80k), also one of the most popular dish in Jubilare. The chicken was stuffed with seasoned rice, and I don’t know what they put in there, but they tasted so good! I remember my first experience eating stuffed chicken in Bali, and it was so awful that I think I won’t have another one. But since the stuffed chicken in Jubilare is somehow recommended, I decided to take a try.

It doesn’t look so appealing to me since it looks like a dying baby chicken with a naked butt. But… I couldn’t help myself from keep eating. My plate was so messy back then.

As for the drink, since the name of the restaurant itself is Jubilare Dine and Wine, not Jubilare Dine and Orange Juice (it doesn’t even rhyme), we had a bottle of Cassilero Chardonnay (IDR 300k). We were lucky that it was on discount. The normal price was like around IDR 500k or so.

It is extremely refreshing with a hint of fruity flavor. I think it was pineapple and vanilla? And it’s really light too. A lot lighter than red wine. Just excellent with seafood, poultry, and pasta!

And….. we had Chocolate Souffle for dessert. Look at that! It’s like… I’m eating a cloud.

Oh, how we love Jubilare. The food, the place, the music, and on top of that, the service was excellent! And we’ll be more than happy to come back for more food!

And hey, Fred! Next time you should probably better told me earlier before planning to have a fine-dining-kind-of-dinner, so I could dress properly. Well, don’t expect a fancy elegant dress with a pair of heels. But at least not in my summer jumpsuit.