Remember about my last trip in downtown Tokyo a month ago? Well, aside from the busy & crowded Tokyo, now we’re heading southwest to an area called Hakone.

Imagine this : a blue sky, a lake with Mt. Fuji at the background, a red shrine gate, and of course, the mountainous scenes. That what makes Hakone area one of the most popular resorts in Japan, I think.

Some shrines does have several gates which located on the way to the shrines. It somehow leads us to the shrine. This was the 3rd gate of the shrines. Well, perhaps you shouldn’t really trust me. I kinda forget if it’s the 3rd or the 4th or the 5th.. or….. But anyway, we’re so close to it!

We didn’t spend much time at the shrine since we have a cruise to catch. Yes, you heard me right.

Remember about the lake I mention before? It’s Ashinoko or Ashi Lake. 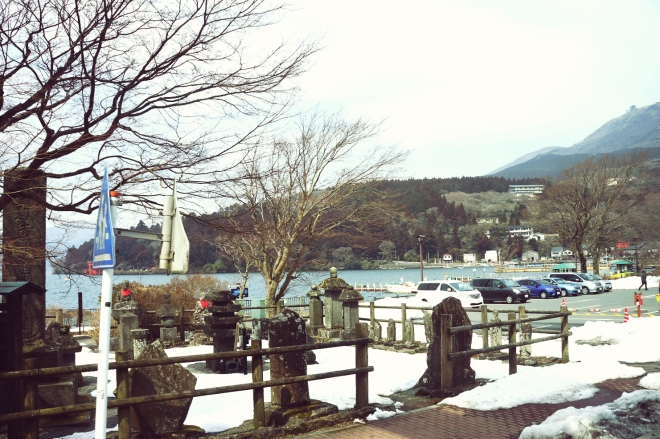 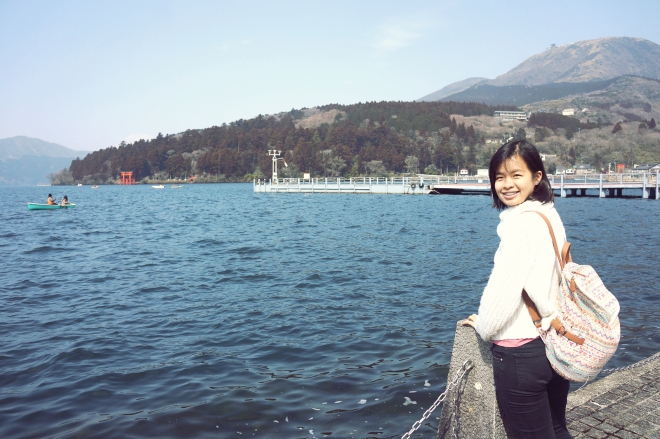 There are a number of boats and even ferries crossing the lake. The one we took was a Pirate Ship. Yes, Pirate. You can check out the schedules and fares here. The ship took us from Moto-Hakone port to Togendai port. 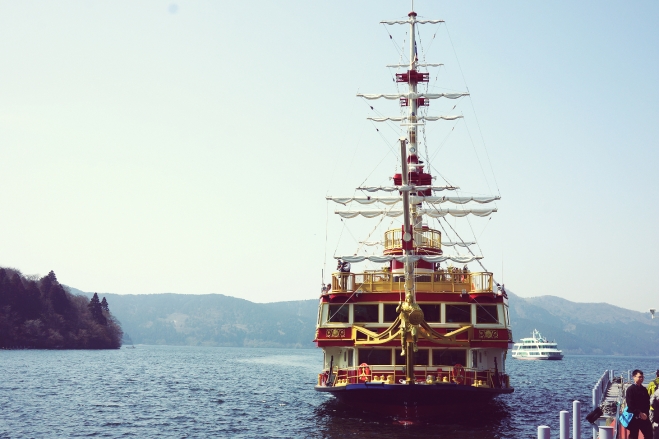 We managed to enjoy the scenery of Lake Ashi from the deck of the ship. And you know, if the weather is clear enough, you can even have a look of Mt Fuji.

Crossing Lake Ashi reminds me a lot of how I crossed Selat Bali from Java island last summer. The only difference I found is the ship, and well, yeah, the weather. Winter is approaching its end in Japan on early March, but still how can you stand the cold of the strong wind when you’re on the deck of the ship?

We arrived at Togendai after 30 minutes of sailing! Now it’s time for some meal. We had some spaghetti with mushroom (didn’t find something special about it) and a big plate of fresh salads. Can’t refuse not finish it up. It was like.. really…. really… fresh. 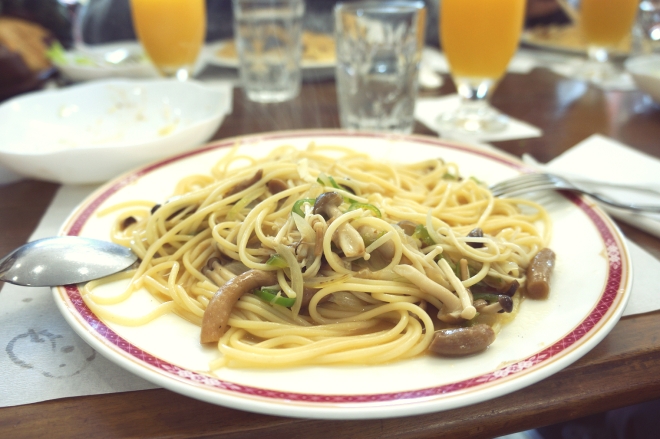 We continue our trip to Owakudani Valley – an active volcanic valley, still in Hakone area. We saw Mt. Fuji from up there! Yes, we were lucky enough as the weather get worse just 10 minutes later and the Mt. Fuji was like… gone. It’s kinda tricky to catch a picture of it. And I failed miserably.

The strong wind seems to like us that day. It didn’t stop blowing!

Reaching the top of Owakudani Valley is quite easy since they built stairs for it. And it’s just around 1050 meters above sea level. 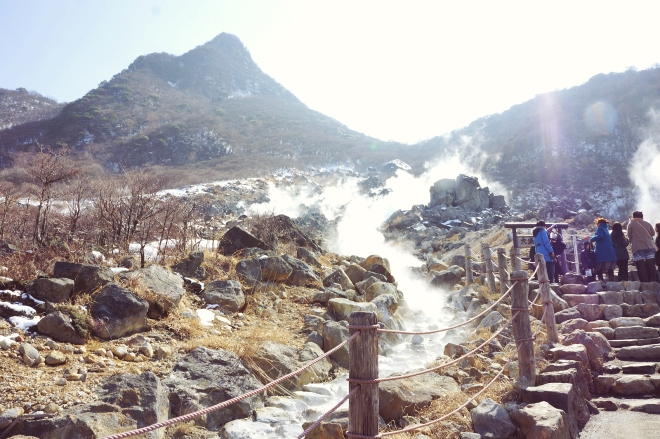 There’s one more thing you should about Owakudani Valley. It’s that it is popular for its Black Egg. It was actually just a boiled chicken egg. But the water itself contains sulfur and iron. That what makes it black then I supposed. Locals believe it can lengthen your life for another 7 years – which is quite silly for us. So we decided not to buy some.

Instead, we bought some Tamago Ice Cream – a soft ice cream made from the egg yolk custard. Yum!

It’s been such a great pleasant escape from the busy Tokyo. And a great day well spent with great friends too!

I found that there are still another part of Hakone to be explored. People usually stay there for 2 or 3 nights. So I guess I’m gonna come back next time ^^