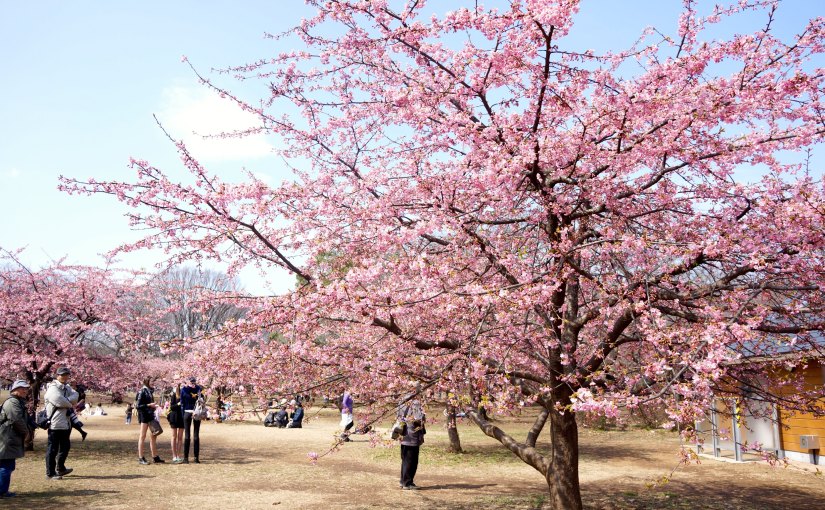 Last month, I got a surprising news from my university. Guess what? I got accepted as an exchange student in TUAT Japan for 2 weeks together with another 3 students from my university (Hilfi Amri, Irfan Nurhadi, and Muhammad Alifa Farhan).

Short story, we had a free time last Sunday. And since Amri decided to go out with the other friends, Irfan, Alif, and I went out on our own. We went to Harajuku, Shibuya, Asakusa, and Akihabara in one day.

How did we get around?

Getting around Tokyo city is easier than we though! Well, not really. I were a lil bit frustrated at the first time using the train. You know, too many people, too many line. But somehow, you’ll get used to it.

We simply use train and bus to get around and bought a PASMO card, a prepaid card for public transportation and vending machines. It’s available at any train station for ¥2000 plus ¥500 for deposit.

Besides, if you’re about to leave Japan, you can just return your PASMO card to the train station and got your ¥500 back. I did that for the sake of having an extra ¥500 to pay for my sushi.

Where did we go?

We decided to go straight to Harajuku first thing in the morning. We went to Meiji Shrine, Yoyogi Park and Takeshita Street – the three most recommended places to visit in Harajuku district. And people’s right! You can’t leave Harajuku without visiting those places. I mean, I thought Harajuku is more like a street full of strange people. But somehow it’s more than that.

I was surprised when we first discovered about Meiji Shrine. Imagine that we’re in one of the most crowded district in downtown Tokyo, and then there’s a quite huge garden (no, more like a forest) with a Shinto shrine in the middle of it. 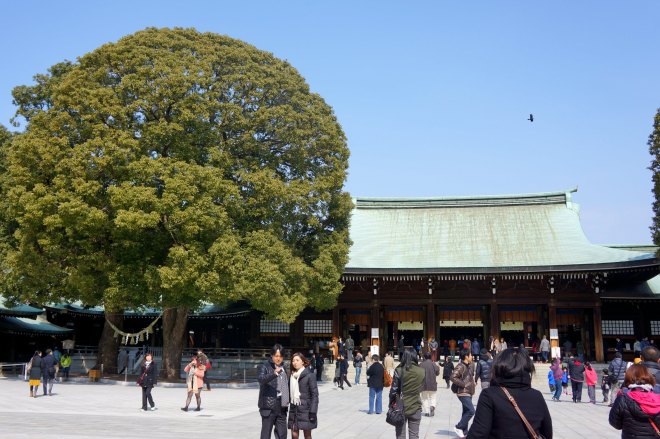 And there are people praying, having a wedding ceremony (yay, we were lucky!), or just taking pictures like we did. But what I love about this shrine, is that it’s not crowded at all. And it’s surrounded by an evergreen forest.

We also found this wooden prayer, I can say, which is simply just a block of wood with your prayer written on it and then you just hang it in front of the shrine hoping it will come true. You have to buy it for ¥500 though.

Since the wooden prayer seems to be a lil bit silly for me, I decided to donate my money in another way. I paid ¥100 to take one random poetry which was written by the Emperor Meiji or the Empress Shoken. And it is believed that the poetry you take will have a particular meaning for you. 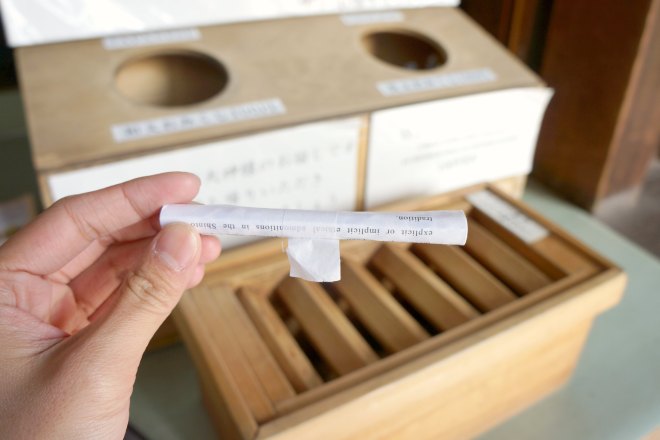 Surprise, surprise. My poem really got me!

“To pass one’s days unworried.
By any trifling thing –
Surely therein will be found
The potion of long life. ” – Empress Shoken

Well. It’s true that Meiji Shrine is a must-visit place in Tokyo. The even better thing is, it costs nothing to do so. And it’s located just next to Harajuku station. Perfect to start a morning!

Our next stop is Yoyogi Park! It’s another thing you wouldn’t expect to be in the middle of the busy Tokyo city. There are people dancing, doing street performance, jogging, lying at the grass, and even taking a photo shot session. 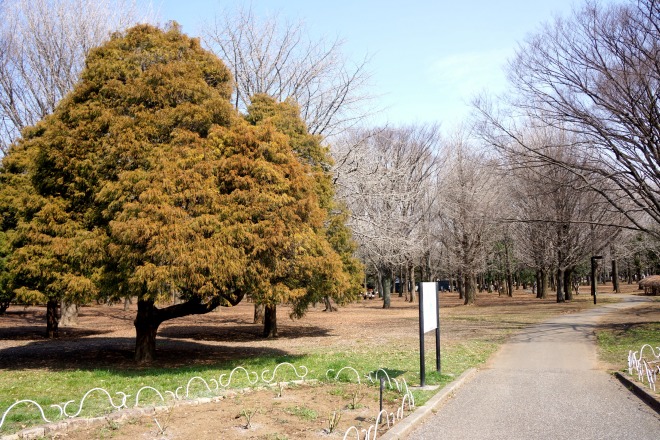 We watched a humor street performance for about half an hour. It’s more like a pantomime, but in Japanese way. They played a funny attractive song as well!

We were lucky to find Cherry Blossom trees which bloomed early. Don’t you think it’s just simply…. beautiful? It is said that there are only 2 places which has an early bloomed cherry blossom in Tokyo city – I forgot where. But this is one of them. 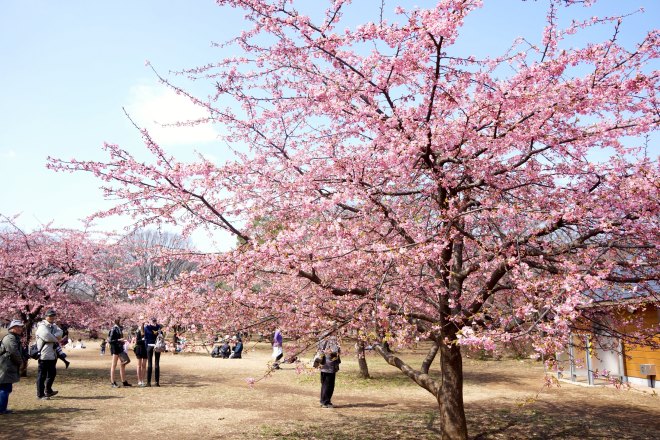 Too bad we didn’t find many people wearing strange Harajuku-style fashion. Perhaps we went to early? Because my friend, Farah, found so many of them at the afternoon!

But walking through this park makes you just forget you’re in the middle of the largest city on earth. Such a stress relieving. If I live in Tokyo, I’ll definitely visit this park every Sunday. One of my favorite place.

After walking around Yoyogi Park, we decided to check what’s in Takeshita Street. Takeshita Street is a pedestrian-only street in Harajuku district. There are a lot of cafes and boutiques lining up at the street and it’s crowded like crazy. Located just across the exit of JR East’s of Harajuku Station.

Two of my friends (Megumi Kashiwagi & Karina Novita) suggested me to buy some crepes in Takeshita street. So here we go! It’s definitely the highlight of our walk at Takeshita street. And oh, we also do some souvenirs shopping at Daiso – a ¥100 shop.

No wonder why people are talking about the Harajuku crepes. It’s oishii! ^^ Costs around ¥500, depends on what topping you choose. And you might wanna know that there are a long line in front of the stall. But somehow, they manage to cook it very fast. 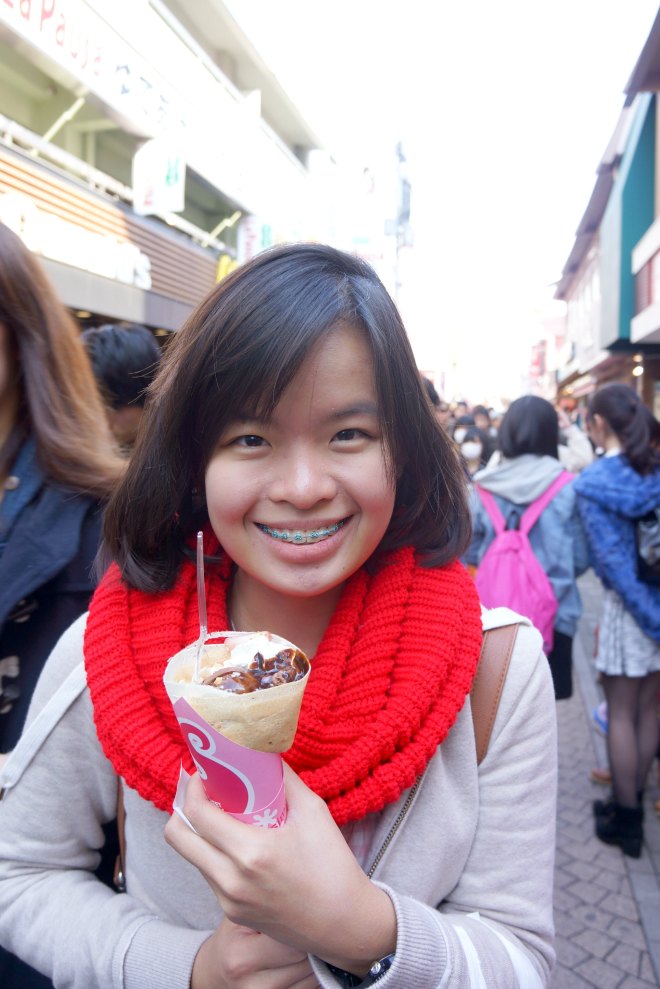 Okay, enough with the sweets. We’re moving to Shibuya Crossing! Just for the sake that it’s often featured in movies which take place in Tokyo, like… Lost in Translation.

Shibuya Crossing is crazily messy! I mean, there are like 5 or 6 intersections and all pedestrians are allowed to cross in all direction at the same time. We even made a video of us crossing the street.

I read somewhere that we actually shouldn’t stop at the middle of the crossing, but we did eventually 😉

Just beside the Shibuya Crossing, there’s Hachiko Statue. If you watched the movie, you’ll know why it’s there.

Then, we found this kawaii girl dressed up as a maid. 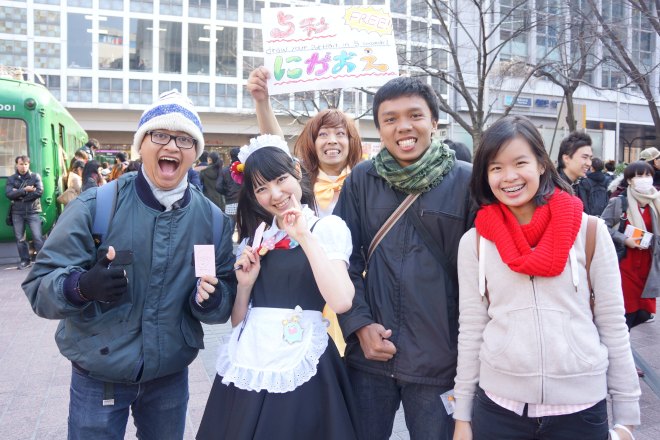 She draws people for 5 seconds and this is the result. Ha! What do you think?

Anyway, we did nothing at Shibuya. Our other friends went shopping since they found a store which sells cheap branded clothes and shoes and many other things. But what we did is just crossing the Shibuya Crossing twice (just because one is not enough) and of course, took pictures.

And oh! We were separated since Alif went to an ATM without telling us! Well technically he did, but it was like an hour before. Irfan & I were looking at the classic cars parked at the street and when we look forward, tadaa~! Alif is gone. Like… gone. Irfan had to stand on a higher place so that Alif could notice us.

Getting lost in Shibuya is not a great idea, though. Just stick to your friends when you’re here.

Asakusa is another famous district in Tokyo. One of the most popular destination in Asakusa is Senso-ji or people just simply call it Asakusa Temple. Different with Meiji Shrine, this one is a Buddhist temple. Not a Shinto one.

I once received an Asakusa-temple postcard from my friend, Nunu. She wished that someday I’ll visit the temple myself. Hey, Nunu! Your wish is now granted! Do wish for another place, please?

Asakusa temple is very crowded. I think it’s because there are so many shops selling souvenirs and snacks along the Nakamise-dori Street, the street that run along the way to the temple.

Anyway. Just near the temple, there’s Sumida Park. It’s a riverside park which take place just along the side of Sumida River, around several hundred meters long I guess. I can see Tokyo Skytree Tower from the park! It’s the new landmark of Tokyo. 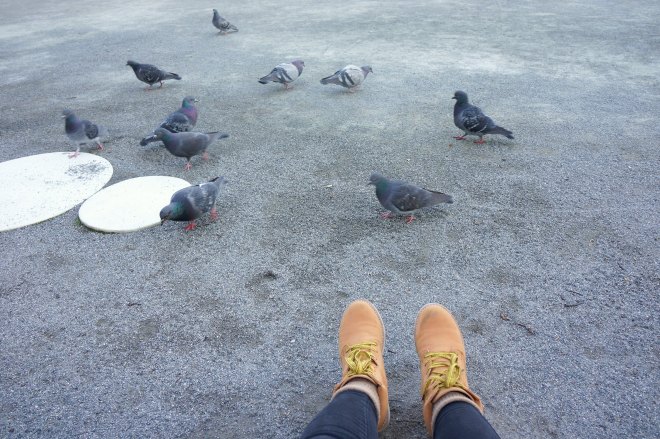 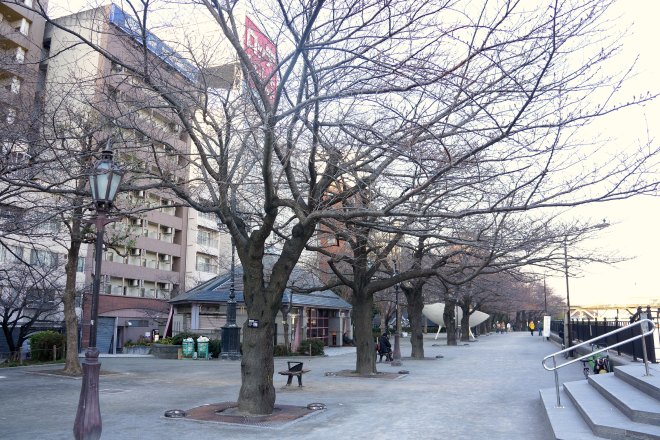 Irfan and Alif had their prayer here at the park. So I walked around, bought a coffee, and watched this music performance. Then, we sit beside the river, enjoying our day.

The last place we visited that day was Akihabara. It’s a popular place for anime, manga, electronics, and that kind of stuffs. Some said it’s a heaven for otaku.

The first place we visited was AKB48 Cafe and Shop. Well, none of us are fans of AKB48. We just want to make our friends jealous. So… are you? 😉 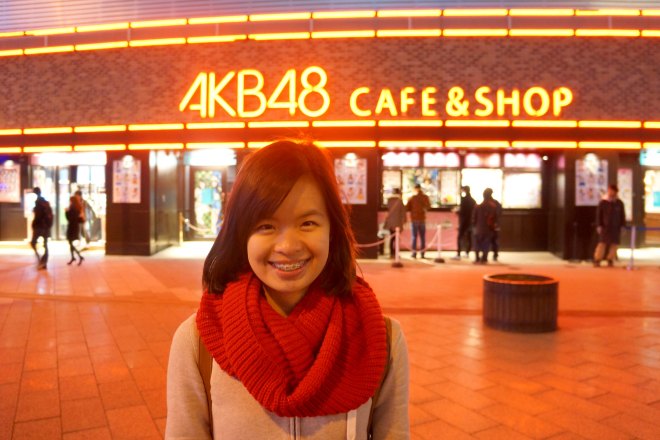 Then we made it to some anime and manga stores. Not my favorite place, though. I don’t know why people spend hours here in Akihabara. But if you’ve been here, you know why people go to the top floors of anime store. Yucks. 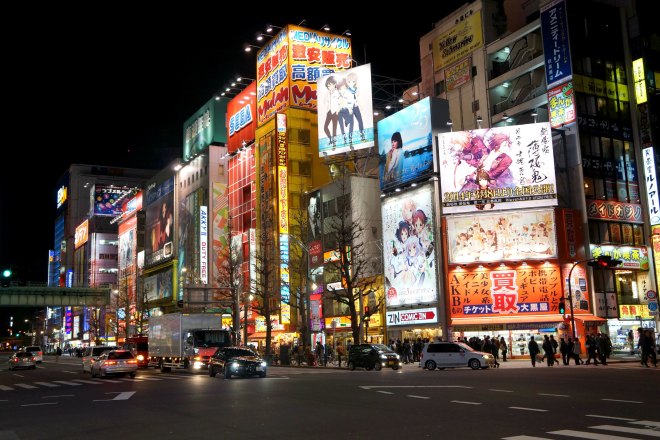 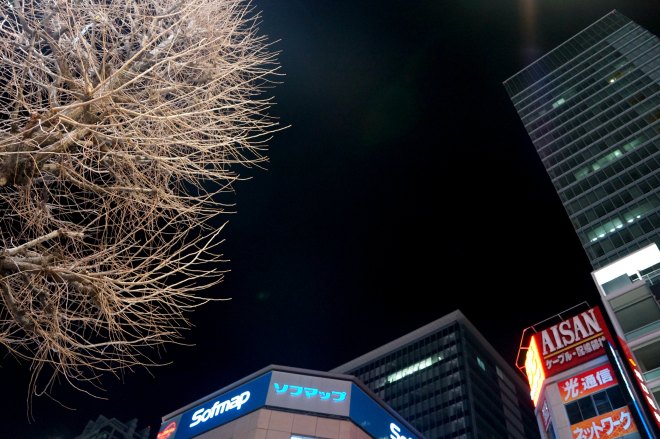 We didn’t spent much time here. Perhaps because they can see that it’s not my kind of place? Not sure. But yeah, sadly the day is over.. I really wished we could go somewhere else after this but it’s already 9 and we don’t wanna miss the train to our home. So…

Anyway, I really had a great time that day. We should take another walk together, guys! In Bandung perhaps? Amri should really join us. Until our next time! Ja mata!

And oh! Don’t worry about the language. Although most of them don’t speak English very well, Japanese are very friendly and helpful. We did speak with our body language most of the time, though. It’s funny how people can understand each other without having to speak the same language. I think that’s the point of travelling itself, to interact with people no matter how different you are.

33 tanggapan untuk “One Day in Tokyo”